“After a flood, drinking water sources can potentially be contaminated with waste from sewage, septic systems, household chemicals, chemical facilities, oil refineries, and other sources”

“Blockages in sewer systems can also cause back-ups. Your health may be impacted if a sewage back-up occurs in your home. Sewage back-ups can contaminate your private drinking well water. It can also pollute surface water (lakes, ponds, rivers, and streams, and reservoirs used for drinking water).”

It has been estimated that around 90% of disasters – hurricanes, floods, tsunamis, etc. – are water related.
Could the world be headed for a major water crisis? 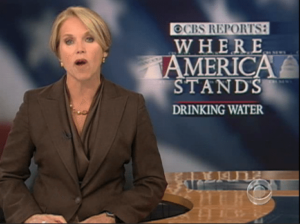 Looking at Earth from space, it seems that our big blue planet is covered with water, and 70% of Earth’s surface is.  However, only 3% of all the water is freshwater, but most of that is unavailable for human use.  Roughly three quarters of all freshwater is frozen in uninhabited ice caps and glaciers, therefore only 1% of the total water supply remains.

Water usage has increased at twice the rate of population growth in the 20th century.  Today, since water is so readily available in homes and offices across the country, Americans have been estimated to use 150 gallons of water per day, per person!

The exponential increase in the consumption of water can largely be attributed to more advanced methods of plumbing and distribution.  While people, mostly women and girls, living in Asia or Africa may have to walk for miles (often over three hours) to retrieve water, those in the West can simply turn on a faucet and have an unlimited supply.

In many places of the world, 30% to 40% of water goes unaccounted for due to water leakages in pipes, canals and illegal connections. Agriculture has caused more than 70% of water pollution in the United States. In America alone, agricultural chemicals (including pesticides) have eroded sediment and when combined with animal waste, have seriouly degraded 173,000 miles of waterways. Industrial pollution has also contributed to comprimised water quality. At least 70,000 different chemicals are used regularly throughout the world and there are between 200 to 400 toxic chemicals that contaminate the world’s waterways, with 1,000 new chemicals introduced every year!

Recent Events in the U.S.

Hurricane Katrina hit the New Orleans area from August 23 – August 30, 2005. During that time, an estimated 1,836 people passed away during the hurricane as a result of the storm conditions. Flooding covered 80% of New Orleans and destroyed more than 100,000 homes. Hurricane Katrina was one of the second strongest hurricanes ever recorded in the states. Over 15 million people were affected as a result of this storm with regards to the economy, evacuations, gas prices or available drinking water.

In New Orleans, about 20% of the city’s 500,000 citizens were trapped without power, food or drinking water. Rescue efforts were so delayed and haphazard that many people were stranded for days on rooftops and attics before help could arrive. The city became a toxic pool of sewage, chemicals and corpses. In February 2006, six months after the storm hit, 16% of the population still reported not having enough drinking water.

The late-season, a post-tropical cyclone named Hurricane Sandy wreaked havoc on the East Coast which left an estimated 109 people dead in the states. Thousands of people lost their homes, streets were flooded and power was cut to parts of the nation’s most densely populated regions.  More than one million people in a dozen states along the storm’s path were ordered to evacuate.  About 8.5 million people lost power due to a nearly 11-foot surge of seawater that plummeted over Lower Manhattan’s seawalls inundating tunnels, subway stations and the electrial system that powers Wall Street.

Two weeks after the storm had passed, half of the New Yorkers were still without heat, hot water or power.  About 35,000 residents were boiling water for baths, using the bathroom in buckets and shutting themselves in when the sun went down.  Citizens said that the NYC Housing Authority was barely visible and were moving ar a snail’s pace to relieve the suffering.

Accdoring to IOL News, “New Jersey was the worst hit. Three towns in New Jersey just west of New York City were inundated with up to 1.5m of water after a levee on the nearby Hackensack River was overtopped or breached. Seaside rail lines washed away, floodwaters forced police and fire departments to relocate their operations, and parts of the coast remained underwater.”

A long cold snap shattered pipes accross the largest U.S. Indian reservation leaving as many as 10,000 Navajo tribal members in the Southwest without drinking water for weeks.  For over three weeks in January, night-time lows dropped to 25 degrees Farenheight which ruptured pipes, including some pipes that were laid in the 1950s.  In Arizona, Gov. Jan Brewer declared a state of emergency over the crisis that also hit the smaller Hopi nation which is encircled by the Navajo lands.

To further illustrate how big this is, the above only relates to Natural or Technologically triggered events.

It does not include wars, conflict related famines, diseases or epidemics.