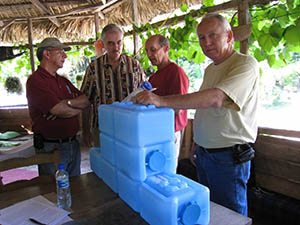 It’s worth thinking about how innovation happens in the 21st century – because by any standard a lot of it is happening. Some would say we’re awash in it. It seems like we’re always seeing new technology pop up, with the promise of more around the corner.

In fact, the advancement of technology in this age seems exponential when compared to past centuries. We had the emergence of the Internet, and then the cloud, along with software virtualization, and now the nascent promise of a metaverse where we will mingle digitally. Fun, right? Facebook’s name change is just one more harbinger of this sea change, which many feel we can soon expect.

However, there’s another kind of innovation happening, too, in the “real world” of analog life for which digital venues are no substitution.

These analog innovations go back to the basics, re-connecting humans with natural elements and systems.

That’s what we think WaterBrick represents – an example of an innovation that’s simple, and based on biological life rather than digital life.

Crop innovations are a similar kind of revolutionary design, and those are being pursued as well.

Frankly speaking, regardless of what we do in the digital arena, we need to have food and water for humans and animals in the biosphere and in their communities.

The WaterBrick represents the ability to sustainably transport water, one of the basic building blocks of earthly life, to where it can be most useful.

In past blogs, we talked about actual uses of the WaterBrick – its benefits and what it does. But today it’s worth thinking about the nature of revolutionary innovations – what problems are they set up to solve? How do we use them in appropriate ways?

Take a look at the rest of the site, and you’ll see testimony from scientists and others about how vital water is to the future. You’ll also see these WaterBrick products being used in ways that represent their value to today’s world, that is in some ways far superior to the value of the cloud, or the Internet of Things, or any of those other new systems being hawked in the digital sphere. In reality, water is fundamental, and so we are a part of helping to innovate its distribution around the world. Being able to stockpile essential resources like this is a major problem-solver that we’ll probably need as we encounter even more innovation in our age.